A NEW DECADE OF FASHION 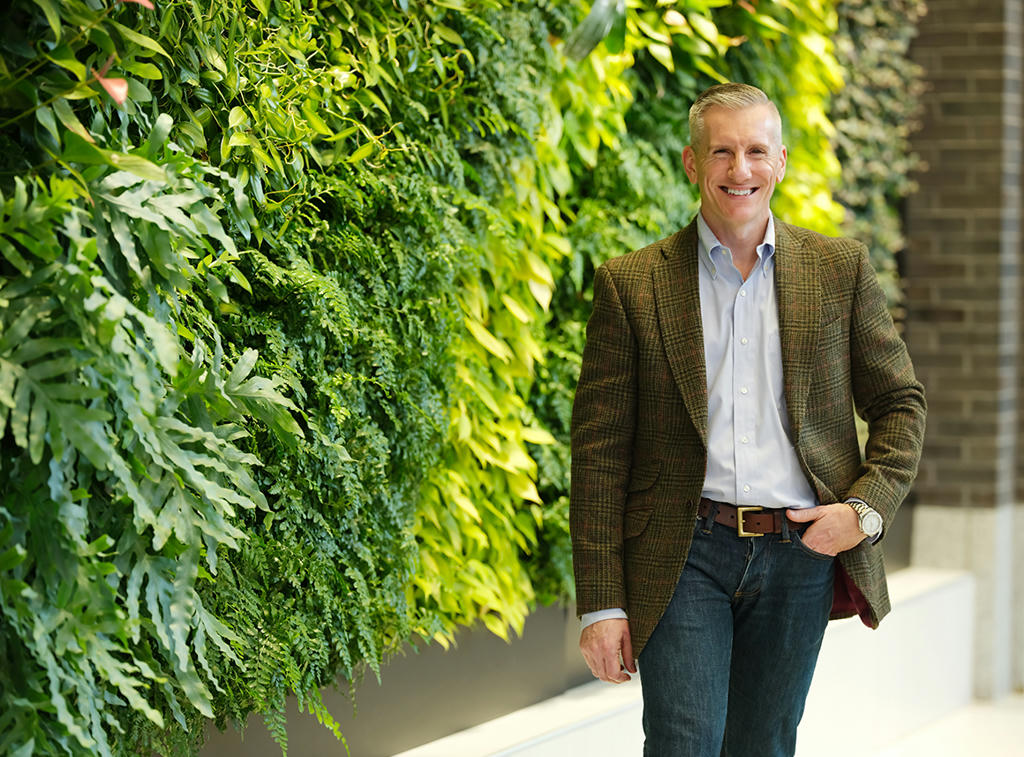 What does “style” mean to Tim Burke? “It’s about projecting who you are, matching colors and patterns to your inner self,” he says. But when it comes to his own fashion choices, he says it’s more about fit than anything else (“especially a jacket,” he says). Tim is flattered to have been named a Man of Style, especially so, he says, after meeting this year’s group on set at the photo shoot.

Most days, Tim tries to be up and moving by 5 a.m., and he starts with a healthy breakfast. After that, it’s pretty unpredictable. “I love that my work is varied,” he says. “Some days, it’s planning a campaign and others [I'm] at a community event.” From the office, he usually heads straight to the gym.

When asked about his proudest accomplishment, Tim says he is always proud to be asked to support a cause that is near and dear to him and supports the community. “In 2018, I was asked to participate in the Leukemia & Lymphoma Society Man and Woman of the Year Campaign,” he says. “To be able to run in honor of my brother who passed from leukemia in 2017 was a great honor.” He also serves on the KidsPeace Board of Associates and has had the opportunity to hear first-hand from the residents about their backgrounds and the transformation they are making in their lives.

What’s more, Tim says he has the pleasure of sitting on the Greater Lehigh Valley Chamber’s Nonprofit & Business Partners Council, working side by side with people and organizations making the Lehigh Valley an even better place to live. “I know so many people working to improve themselves and our community; I take inspiration from each of them,” he says. This year, and every year, Tim says he’s committed himself to traveling to new places. “I’m continuing that for 2020 with a trip to Egypt,” he says. 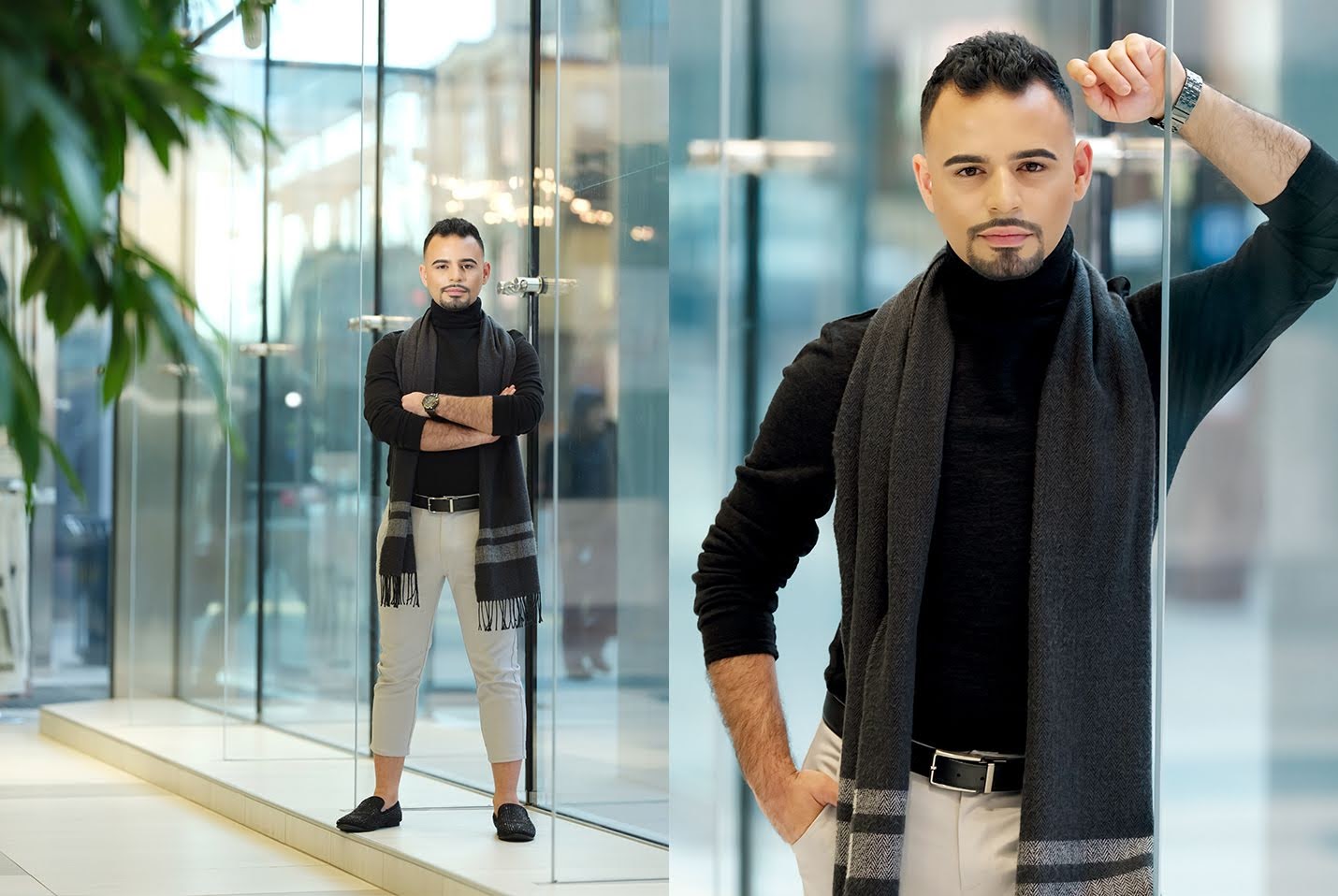 Jon Vega was shocked to have been nominated by his boss, Roxy Williams, and his colleagues for this year’s Men of Style honor. “I am humbled that other makeup artists recognized my passion and took it upon themselves to submit my information on my behalf,” he says.

The same could be said for his work. “As with any form of artistry, the goal is to rarely have days ever look the same,” Jon explains. During his seasonal peak times, he’s up as early as 3 a.m. and on his way to the studio to begin taking clients, noting that his early birds are typically the NPC National Bodybuilding Champions. After that, there’s usually a wedding appointment on his list.

When the first half of the day is complete, Jon heads to Sephora at the Lehigh Valley Mall. “Once the long day is over, I am fortunate enough to be able to come home to the best guy in the world and finally relax with a glass of wine,” he says. Jon shares that naming his proudest accomplishment is hard, because there are many things he could mention. “I would say 2019 has manifested many accomplishments I have previously hoped for,” he says, emphasizing his full-time job at Sephora. “I am proudest of the fact that, with Makeup by Roxy, my artistry has helped me reach new heights within my career. I have managed to build a sustainable list of regular clients.”

And he says Roxy Williams is a true inspiration. “When I think about what or who specifically feeds me the idea that I can become the artist I want to be, who leads me to think I can make makeup artistry my life’s work and passion, it would undoubtedly be Roxy,” he says. “She serves as my leader and my inspiration.” 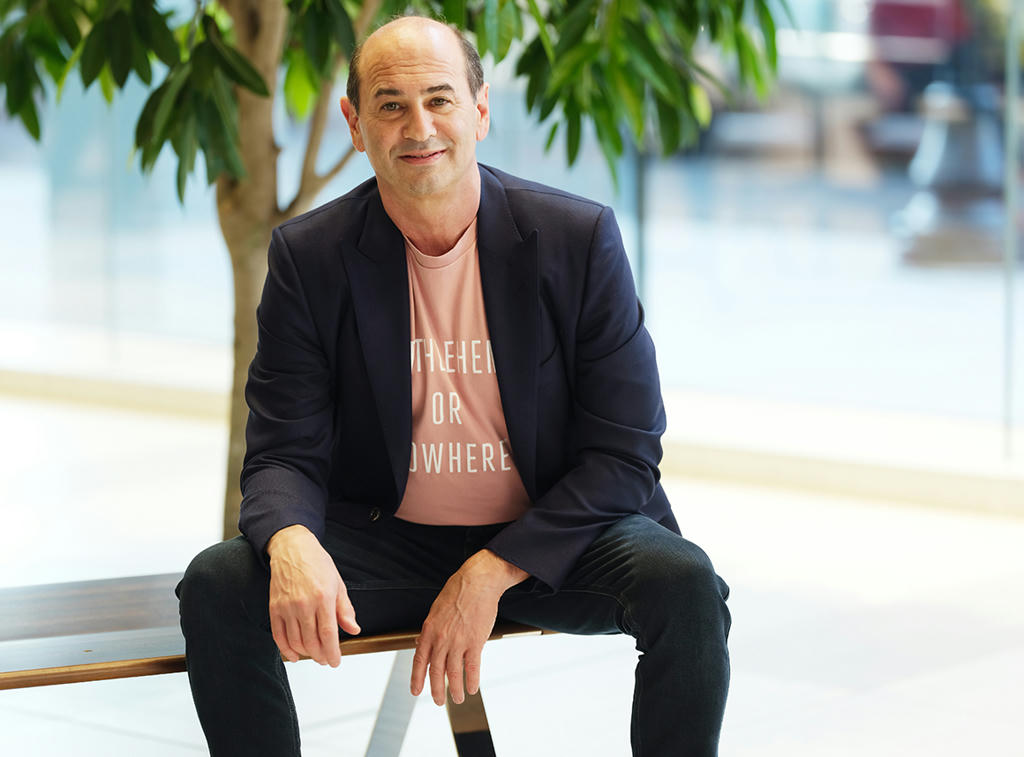 When asked what “style” means to him, Dr. Robert Kevitch says that it’s a complicated question. “To me, it means feeling as comfortable and confident as possible,” he says. And in terms of what he likes to wear, Kevitch says classic, well-made pieces and good tailoring are a must. He feels his best in a sport jacket, collared shirt, trousers and great shoes—no tie!

He is flattered to have been named a Man of Style, crediting his wife and kids who are much more engrossed in fashion than he is, and joking that their family shopping trips have finally paid off. “All kidding aside, I appreciate the honor. It’s made the people I love proud of me,” he says. “I feel like it’s a genuine accomplishment considering I spend 90 percent of my time in baby blue scrubs.” A typical day for Kevitch means he’s up by 6 a.m. and off to surgery or his office hours by 7 a.m. For him, the day flies by whether he’s in the OR or at the office seeing consults and post-ops.

When asked about his proudest accomplishment, Kevitch responds, “I’m most proud of the remarkable young women my daughters have become. Hopefully I’ve played some small part in that.” And it’s his wife, he says, who inspires him most.

A charity near and dear to Kevitch’s heart is animal rescue. “My wife has been involved with Last Chance Ranch in Quakertown for over a decade, and her passion for it has completely rubbed off on me,” he says. “We have two rescue dogs and have fostered others, and she even takes me to the shelter for a little ‘hands-on’ time with the pups.” 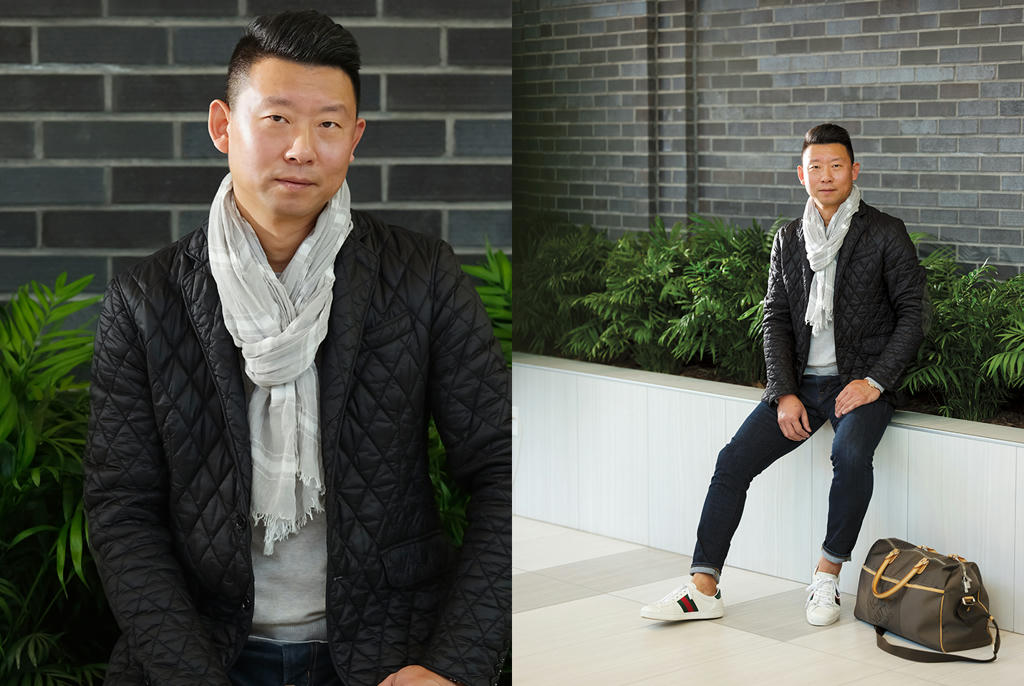 Marco Lu says he was astonished to have been named a Man of Style. As the founder of Rakkii Ramen in Bethlehem (along with Doylestown, Smithtown, NY, and New Brunswick, NJ), Marco spends most of his time in a uniform. “I am ecstatic to hear my sense of style is something that people enjoy seeing,” he says. “To me, style is how someone carries themselves. Style is not exclusive to defining someone’s clothing.” Still, Marco says he feels his best when dressed professionally, and a tailored blazer is key. “Each article of clothing cannot be too baggy or too small,” he explains. “That's why tailored clothing, or spending a bit more time on finding clothing that fits you, is much better than wearing something that isn’t your size.”

For Marco, a typical day begins by checking in on his restaurant’s Bethlehem location, ensuring that everything is functioning well. He leads a team meeting and tests each broth to make sure that the food is prepared correctly. After opening at 11 a.m., Marco is off to one of his other locations, where he spends the rest of his day training the staff. “If I am not at one of the three other locations,” says Marco, “I am making business trips to neighboring cities scouting for new potential locations to grow my business even further.” In 2020, he hopes to spread his love of ramen to four new cities (he’s also created a new bubble tea business, which will be a main focus).

Marco is greatly inspired by both of his parents, who taught him how to cook. “When I was in middle school, I was able to cook entire meals for my family,” he says. “Seeing my parents work so hard for me motivated me to, at the very least, cook a meal for them. The discipline they taught me has been carried through my entire life as well as my love for cooking.” 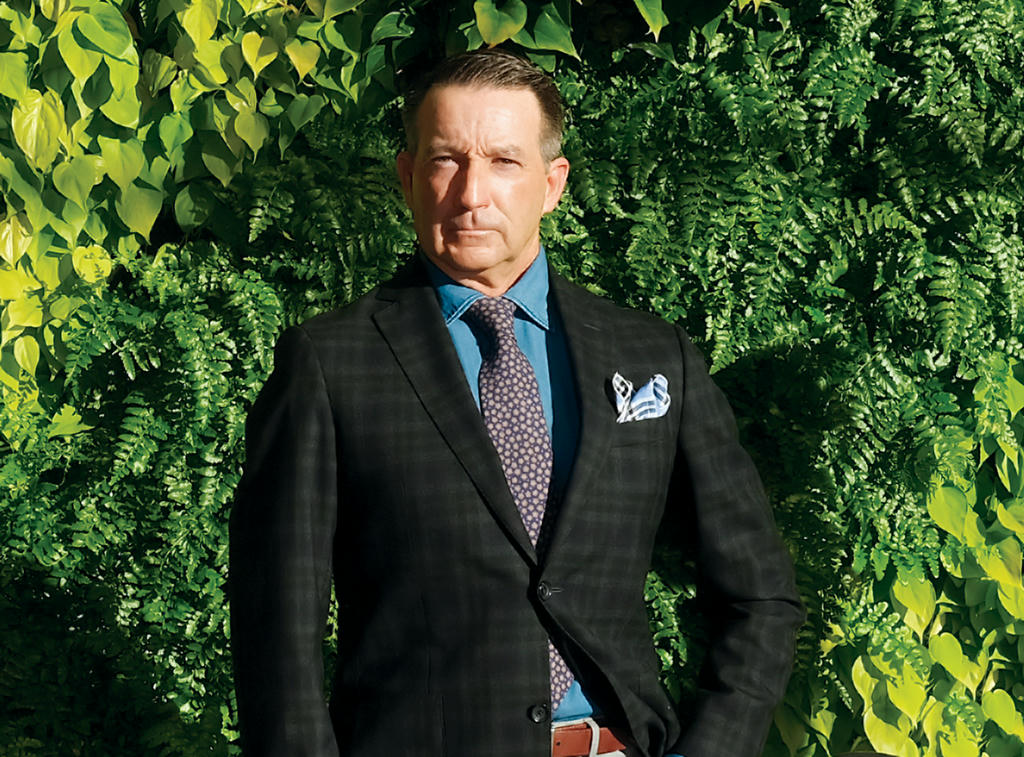 John Supinski says he really enjoys putting together “a look,” and being named a Man of Style makes him proud that someone else noticed! “My style is not trendy. My style is what you call permanent fashion,” he says. “It has a classic foundation that always looks good year in and year out.” John says he feels his best in a well-fitted, dark suit or jacket, and his style is inspired by Ralph Lauren, calling it enduring classic style. “[It] allows me to look and feel his tradition,” says John.

His proudest accomplishment was becoming an occupational therapist. “I was a non-traditional student and went back to school at Thomas Jefferson in Philadelphia when I was 30 years old,” he says. As an occupational therapist, John spends his day giving rehab to, mainly, the elderly who have suffered a stroke, hip or knee replacement, back surgery or heart condition. “The goal is to get them back home as independent as they can be to take care of themselves,” he says. Outside of work, John finds it important to work out every day, running and doing Peloton.

Husband to Ann Marie Supinski, the owner of Historic Downtown Bethlehem’s AM Luxe, John supports the business’s Shop With Purpose events and charitable efforts, noting the breast cancer 5K, YWCA of Bethlehem and Truth for Women. His goal for 2020 is to take care of himself the best he can by eating healthy and continuing to work out every day, while also appreciating time with family and friends. 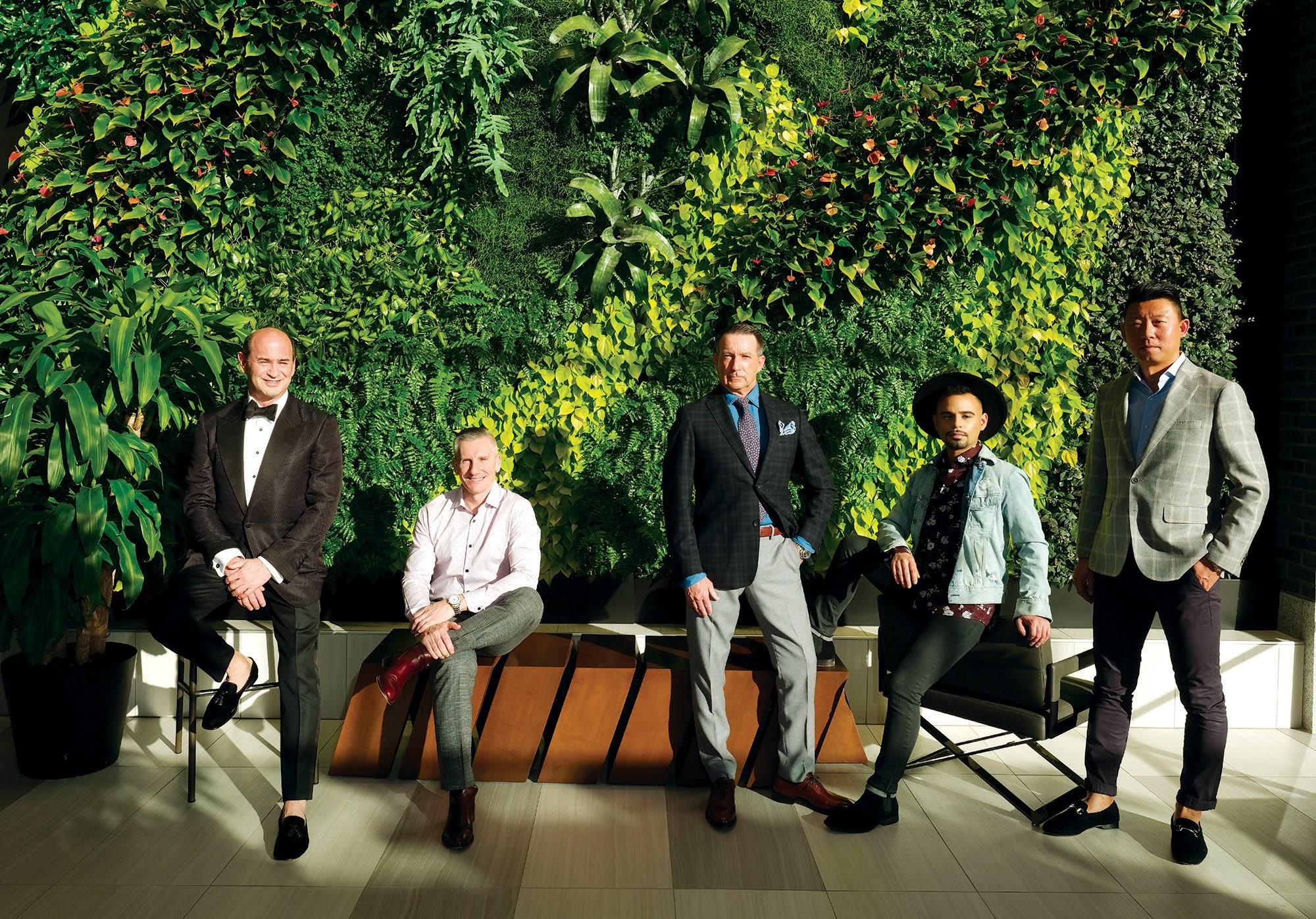